I have a secret to tell....ssshhh...are you ready, come closer: little me has been invited to be a guest designer on the Knitty Gritty show!!! I am at the edge of my seat, sweating and hyperventilating! I have known for a few days but I couldn't tell anyone--it was just too "unreal" that they accepted me and my little looms to come to the studio. I will be meeting the superb Vickie, that is if I don't faint and end in a comma at the hospital from hitting my head on the floor! 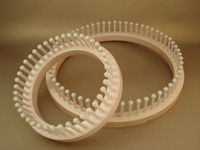 I will be demonstrating loom knitting and a really cool fair isle project. I am flying out at the beginning of December to tape the show which will air sometime next year (probably in the fall).

Here, you can watch the little video I prepared as a mini-demo about me and me looms...don't laugh, I had to film it all on my own, while the kids kept knocking on the door (the video was somewhat like my interview for the producer--talk about feeling the heat!!).

I am so nervous...I have a few days to calm my nerves and stop squealing from excitement. This is such a huge thing for us loom knitters, our craft will be featured in such an important show: in the words of Neil Armstrong adapted to knitting looms: One small step for me, one giant leap for the loom knitting community.

Congrats! I look forward to seeing it! We'll all be rooting for you and sending good relaxing vibes for you on the day!! Yay you!!

WOW! Isela how wonderful! I always knew you were a star! Congratulations!

Congratulations... I recently purchased a knitting loom and creating a scarf and hope to learn a lot more... Again congratulations and look forward to seeing on TV.

That is such exciting news! Congratulations!

Congrats! I'm so excited for you!!

That's so EXCITING! Congratulations! I'm very happy for you. :-)

Congrats! That will be so neat. :D

I knew in Rhinebeck that I was rubbing shoulders with the greats. I had no idea about the future greats too!!! Congratulations!

That is so awesome!! You're going to be just great on TV.

How could they not after y'all showed up at her blog that one day! Congrats!

ISELA!
I'm so happy for you! This is great news! Congratulations!

i KNEW it would happen! It was just a matter of TIME.... Congratulations!Don't worry you'll be awesome, remember even some needle knitters don't know what can be done on a loom!

Congratulations! I'm so excited for you and can't wait to see you on TV.

You HAVE to let me know when it is on! I can watch it on my slingbox! that is so cool! You rock! hehe

That is so COOOL! You are hitting the big time.

THAT. IS. SO. FREAKING. AWESOME!!!!!!!! I am so proud of you for making it so far with something you love so much. Let us all know the second you can when it airs so we can watch it and say HEY! I KNOW HER!

Isela this is fabulous!!!! You are really going to put looming knitting on the map. I can't wait for your episode to air. I knew they were going to have a loom knitting episode or two, but who knew we'd actually know the guest!

Woo Hoo!! Congratulations! Any chance you're taping on the 4th? That's when Kaity tapes - how fun would that be??!

OMG!!!! Isela, this is such wonderful news! I am so excited for you --I can only imagine how you must be feeling:) I'd be jumping up an down, squealing with deligh and telling anyone that would listen.

Please make sure to post on when you will be on so that we can dvr it or tivo it.

What excitment--heehee and I don't even know how to use a loom:)

PERFECT! You are such a natural speaking in front of a camera. I am so proud of you coming this far and it's only up from here girlfriend! The sweater is really cute and I couldn't believe how fast you said you knitted it up. I love your accent!

That is awesome! I can't wait... now I have to upgrade to digital cable and get DIY for sure!

I was going to comment on the NY post, but you posted this too fast. Great pics. Congrats! Keep me in the loop on your CA visit. If I can drive by then, I'll drive down yo LA to meet you!!!

Congrats Isela! I'm so excited for you, your video was excellent!

WOOO HOOO!!!! Can you hear me cheering in Oregon??? :) This is absolutely perfect. CONGRATULATIONS!!!!

Woohoo! Isela goes live! This is the most exciting news--I will be sure not to miss this one!!!

Isela -- could you be any cuter? With all your exercizing and a New York vacation, you will absolutely *dazzle* the tv folks. Man - I've got to up my cable subscription before you air!

HOW FABULOUS! This is wonderful news.

You will be amazing, as always, and everyone who watches your segment will want to run right out and start loom knitting (get ready Sam cause you will be making tons of looms).

Also, they will love you as much as all of us already do! : )

Wonderful job.
Very happy for you.
Be sure to let us know when you will be on Knitty Gritty.
:)
Susie