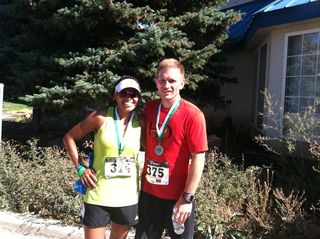 Hubby and I participated in another half marathon this weekend, the Bear Lake Monster Half Marathon. We were excited about this one, it had a completely different terrain than what we are used to. The Bear Lake Monster Half is all on dirt roads/ATV terrain, and it included climbing 1,100 feet of elevation. Usually, our races include dropping 1000-2000 feet of elevation but no climbing unless is like 200 feet.

The night before the race, we prepped all our stuff for the race and went to bed, around midnight, we started hearing the sky rumble. Oh no! I don't like running in rain, it gets quite cold up here when it rains and the last time I ran a race in the rain, the sky decided to drop some hail on us and I didn't want to repeat it again. We went to sleep and when we woke up the rain was still going :/ bummer. We got in the car and as we drove over to Bear Lake, I kept praying for the rain to stop. It took us about 45 minutes to get there and the rain was constant.  We got to the race start and we got our packets and the rain still continued. 45 minutes to start of the race and the rain started slowing down, then I looked over the mountain and I could see the sun and a hit of clear blue sky. I got hope in my heart. 10 minutes before the start of the race, it was like a blanket was pulled away from the sky and the sky turned a brilliant blue. It was a beautiful morning for a race! 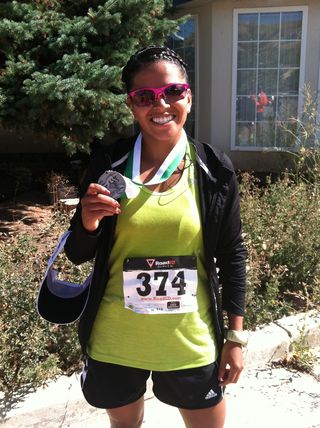 We lined up at the start line and there were just a few of us, probably a total of 50 people in the half marathon, 5 of them my friends, 2 of them crossfit athletes. We took off and we went out, about 1 mile was paved and as we went out, I was one of the first women out. Hubby quickly got up to the front of the pack and I stayed behind at my own pace. We passed the first aid station, then the hills and dirt roads began, unpaved territory for me, no pun intended.  The course description mentioned hills then downhill, well I was counting down the miles to the downhill. Up and up and up we went, some little downhill only to be confronted with another hill. I tried to run them at the beginning, but quickly I realized that my legs couldn't handle it, so I started walking. I felt guilty walking, I rarely walk, unless I am feeling sick and I wasn't sick so the guilt was eating at me. But, I swallowed my pride and walked. I walked most of the hills and ran whenever I could. I decided that if I couldn't run, I would at least walk, definitely NO STOPPING, but walking was okay.

I stopped at the aid stations and got plenty of water and took advantage of the tables to simply lean on them and rest up. I continued with the challenge of climbing up the hills. My legs are so not used to hills, I totally suck at them, and they get in my head and break me. But, whenever there is downhill, I can totally own the course and I took advantage of each of those dowhills.  After many hills and rolling baby hills, I finally reached the aid station between mile 6 and 7 and the volunteers told me that the downhill was finally coming. I believed them, but first I had another major uphill, so I walked it and then finally the descend started and my little legs took off.  There was another gal in front of me and we kept going back and forth, either she was in front or I was and we kept at til around mile 9, then I was ahead til we reached mile 10.  We arrived at the last aid station, around mile 10, and I rested, took two full cups of water a nasty GU, and the gal caught up to me and we both were at the aid station for a few seconds.

In the last 5K of a half marathon, I like to tell myself, you only have less than 30 minutes, you can do anything for 30 minutes.  Well, except this half had another small uphill for me, the other gal passed me at this point and I wanted to kick myself for not being able to keep up but I just found my comfortable pace and kept going. The other cute gal was just a few steps ahead of me for the next mile, her being in front helped me tremendously as the road had a lot of rocks and the road was narrow so wherever she stepped, I stepped.

On the last 2 miles though, she slowed down a bit and I passed her, I looked at my Garmin and I was excited to be done.  The road was downhill and I decided to take those last 2 miles as a WOD, I pushed and pushed. The first aid station/last aid station was up ahead and I took off my sweater and gave it to my friend Lori from the NERC FB group. I knew that I had only about a mile left from the aid station so I told myself " the road becomes pavement, it is a WOD, no stopping!". I took off, no prisoners, it was just me and the road, Eminem's song 'Til I Collapse came on my iPod on cue and it was time to work straight from the heart. The moment of truth, the moment where I could be either 2nd place or 3rd was to be decided on the last mile of the course. I wanted to look back and check on the other gal, but I didn't want to lose time, so I pushed and pushed, I could see the gal in first place about 1/2 a mile ahead of me, no way I could catch her, but I had a chance at keeping my second place if I just kept going. So I did. I pushed. It hurt. My lungs were burning, my legs were screaming in pain to stop or at least slow down.  We had to take a left hand turn at the end and I had just enough time for a glimpse behind me, but it was enough to see that I had gained at least 1/2 mile on the other gal, but I was not done yet. I had to keep pushing to the end then I saw my hubby already at the finish line, he was wearing his medal and he had a big smile on his face and he yelled "go Isela" and it was just enough to get me through the Finish Line. I had it! I conquered the Bear Lake Monster and I came in 2nd overall, it is my slowest time ever, but it was good enough for second on this challenging course.

At the end of the race, the other gal and I chatted for a bit. I thanked her for pushing me throughout the course for being there when I needed her,  she did the same. It was a tough course but I am so glad that I did it.  The views coming on the way down were spectacular. The lake looked so blue and it truly mesmerized me. I can't wait to do it again next year! Hubby finished 9th overall. He is such an amazing runner! See you next year Bear Lake Monster!

Elevation map--just because it was the hardest darn half I've ever done in my life! It must be recorded in internet history that I did run walk this half!

You did awesome. I love you. I am your number one fan!