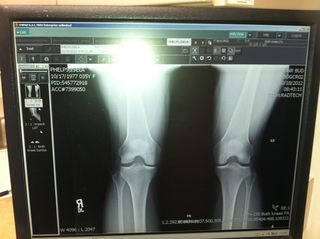 Almost to the end of the running season and I go and do something completely stupid. I injured my right knee.

How did it happen? Well, I went to a Zumba class where they have a spring board, a gymnastics place. I have never done gymnastics and have never been on a spring board so to tell you the truth, I had no idea what to expect. I went to the front to dance and of course, I like to jump and when I jumped, my leg was prepared for the first landing, however, I didn't realized that there would be a second jump produced by the spring floor, on the second jump, my knee/leg was not prepared for it and it went under me and to the side. It hurt. I felt the pain hit through the knee and up my  leg but I continued and finished the song. As the song ended, I went to the back of the room to check my knee. It wasn't swollen and it looked "in place". I hobbled around and then left to go home.

As I got home, I inspected the knee closer and it was getting swollen. Pain from 1-10 was about a 8 when I walked and a 10 if I touched the knee.  I decided to massage it and stretch it. I rolled it and it hurt. I wanted to make sure that it wasn't my IT band so I rolled the band and it hurt but not badly, just regular IT band tightness.  But there was something wrong with my knee, pain is not normal, hahaha.

Next day, I made an appointment to see my A.R.T doctor, he worked wonders on my achilles and was hoping that he would be able to see if was my ACL. He massaged the area and worked some knots out but he couldn't tell for sure if it was my ACL or not.  So off to another doctor I went.

Today, I went to see the orthopedic and had X-rays done and a complete examination of my knee. Diagnosis without MRI: Patella Tendon strain/sprain. What happened: The pulling force from my femur and tibia pulled the tendon on that second jump when the leg wasn't prepared and it pulled the tendon too much. Then the force of the femur and the tibia colliding together squished my meniscus and thus the pain in that area.

At this point, rest, compression, ice, and more rest. I will go in later today for steroid to bring the swelling down to gain more mobility in my knee. If I am good and stay off of it, and if the swelling is down I *may* be allowed to run on it next Friday and if everything feels good, I *may, may* be allowed to run the Halloween Half on the 27th. If there is any indication of swelling, I can kiss the Halloween Half good bye too.

Despite all that, I am very HAPPY that it is not my ACL and that none of my tendons are torn. I was very lucky that everything was strong enough to sustain the force of the impact.

Now, I just need to take it slow and rest my knee for a bit.
What I learned: no more jumping on springy floors, at least not until I learn how to use them.

You work hard to learn and become the best that you can be. You, like everyone else start at the bottom and work and work to better yourself. One day, you look around and you are there. You made it. You accomplished your goal.

However, instead of rejoicing about reaching your goal, you spend half the time worrying because others see you as a threat. Even if you don't see them as a threat they see you as such. No matter how friendly you are or that you try to be helpful, it doesn't changes things.

The question is: is it worth working so hard to be the very best if while doing it, you make frenemies all around? Perhaps it is the industry? Maybe that is the reason why I am moving away from what I "love". I am tired of competing in something that really doesn't mean that much in life. At least not in the long run.