I am in!!! I am in!!! I have wanted to do this marathon since I started running. I never thought I would qualify, however, I did qualify with my Big Cottonwood Half Marathon time from 2012, with a time of 1:28.

When I signed up for the lottery, I really didn't think I would get chosen. However, yesterday, to my great surprise, I received an email letting me know of my status. I had completely forgotten about the application, so it was truly a surprise :). 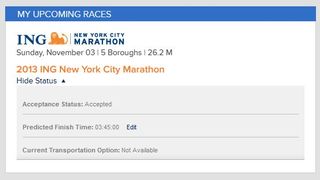 Talk about a crappy time for a marathon. The weather was nasty! Just plain nasty! It rained and it was cold and windy. And I wasn't dressed appropriately for the type of weather. I thought my jacket was going to be sufficient but apparently it wasn't :(. Bleh!!!

In addition to the weather, my tummy issues came to haunt me again starting at mile 3. It felt like a volcano was erupting inside my belly, not my stomach (not behind my ribs), it burned and it burned. Pain is something else and I can more or less deal with it but this burning is not something that I am used to. The last 23.3 miles were hell for me. More than once I wish I was dead rather than suffering from the burning in my gut.

Despite the burning in my gut, at mile 8, I was on pace to finish at a 3:3oish pace. I felt confident that if I could just get my GI issues worked out that I could have a great race. However, my body temperature dropped too much, I shivered for most of the race to the point that I could barely open my hands to grab water from the aid stations.

At mile 7 or 8, I met one of my pacer friends and he gave me a Tum for my gut burning. It helped a little and I was able to move along but the burning still continued. I tried to fight it off with bananas but nothing helped.

Then my tendinitis in my ankle started bugging me too, I think the cold just aggravated it more and it became so painful to run. I managed to run til mile 23, then I looked inside me and realized that I was dealing with three things that I just couldn't handle-the cold, the burning in my gut, and then my ankle. I was injured. I shouldn't have been running in the first place due to my ankle but if I didn't run Ogden, I can't get into St. George, so I went and lined up at the start line.

I struggled mentally the last three miles. I needed something to quench the inferno in my gut and I was taking anything the aid stations were giving. I knew bread like stuff will just make it burn more but the cookies they were giving out sure felt good and solid and appeased it at the moment of ingestion, not so very much after.

Walking for the last three miles was the most humbling experience of my marathon running experience. I have always toughened it out and at least jogged but not this time. With tears running down my cheeks and my heart breaking, I walked, I walked to quench down the burning in my gut and the pain in my ankle. Then, I would wipe my tears away and talk to myself about "crossfitters never give up" and I would run again for a little bit. Then the burning will become unbearable and the tears would start streaming again and I would repeat  the process. I think more than anything, I was mad at myself, mad that I couldn't overcome the burning, the pain in my ankle and the stupid cold weather/rain.

As I was nearing the finish line, the last stretch is a straight away that you can see the finish line for what seems like an entire mile. I was hobbling along due to my ankle, holding my gut with one arm and trying to keep going. I found a new runner friend who was struggling too and we ran together that last bit. As we ran, we tried to encourage each other to keep going to the end, no more walking, just jog it to the end. An older man came running really strong by our side and as he was running, he was talking to himself really loudly saying "I am strong. I am speed. I am powerful" to which I added "I am tired!". Hahaha, that made my new friend laugh and it kept us happy for the next block.

As we were about to cross the finish line, I saw my hubby and some of my friends on the other side, encouraging me to come forward. I was beat. I didn't have anything else in the tank. I had used all my body had to carry me to that blue mat. I was so cold. I was in pain from my ankle. My belly burned. I wanted nothing else but to cry but my friends were all there. My good friend Gustavo right away saw my discomfort and he tried to get me to drink some water and eat something. Hubby wanted to carry me to aleviate my ankle pain. Me, I just wanted to dig a hole in the ground and die! I had finished but I had finished the worst race of my entire running life. I have never hated running more than I did that very day. It wasn't the running that I hated, it was me, my weak body that couldn't handle it, my weak mind that couldn't overcome the obstacles that were thrown at it. It was the first day in a very long time that I realized that perhaps, I am not cut to be a runner. I felt defeated.