Quote for this next week

Like success, failure is many things to many people. With Positive Mental Attitude, failure is a

learning experience, a rung on the ladder, a plateau at which to get your thoughts in order and prepare to try again. 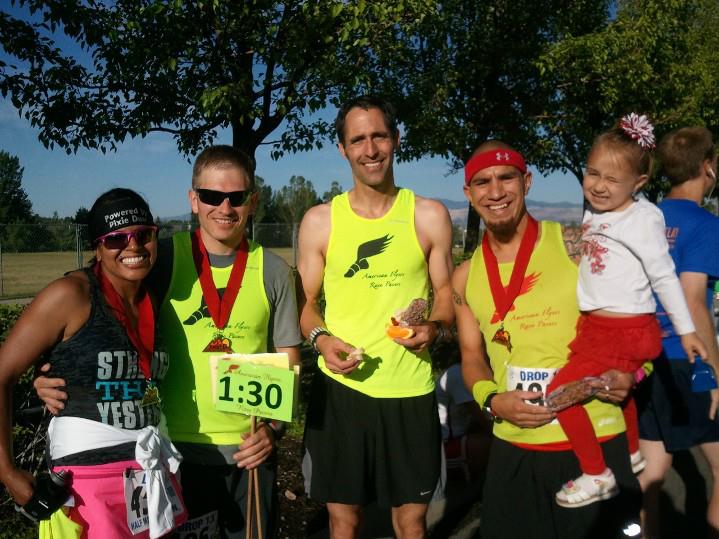 Had the chance to run the Drop 13 Half marathon this weekend. My hubby was a pacer for the 1:30 group with the American Flyers Race Pacers. I was supposed to pace the 1:45 but since my ankle still is suffering from tendinitis, I decided not to pace. I didn't want to fail my group just in case I couldn't hold my pace. We drove down the night before and picked up our packets. It was awesome to go to the Salt Lake Running Co store, super awesome running store, it is like runners-heaven!!! I picked a little something! That sweet Pearl Izumi cropped jacket! Talk about cute and functional! 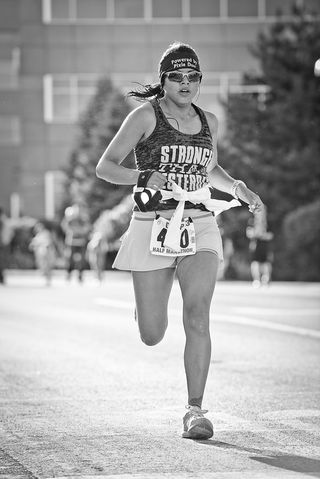 Hunny and I stayed all to ourselves at a hotel, rare occasion, however with a 4am wake up call, no time for romance, hahahaha.

We walked to the bus load up from our hotel and found our pacer friends and my sweet friend Angie from crossfit. We loaded the bus with no problems. The ride up was easy and was able to nap a little. Start of the race was a bit hectic though, not enough porta-potties and the lines were super long. I had to go so I needed to stay in line otherwise I would poop my pants! So I waited and waited and waited. The race started and guess where I was, yes, I was still waiting to use the pooper!!! Both, Ang and I were there waiting. As I waited for the bathroom, and saw the race start, I thought well, it is better to not poop my pants.

Both Ang and I started the race at the same time, we were all alone with another runner at the start line, kind of lonely. However, it was kind of nice to see all the runners as we got closer and closer to them. We were joking while waiting for the bathroom that we could start counting our "Ragnar kills" that very day hahaha. Being at the very back was not what I was planning. I wanted to run with Sam but there was no way I could run fast enough to catch him, I was a good 5 minutes behind him to start off. But, I certainly tried. I kept looking for the Pacer signs to see how far I had to go to catch him. He was the first pacer, so I had a lot of ground to cover. I ran as fast as my ankle could carry me. It did alright but around mile 3 it started bothering me so I took some ibuprofen for the pain. Also, my stupid gut was starting to burn so I took some tums too. I can take the pain from the ankle as that is pain but the burning in my belly is not something I can control or help. As I ran, I kept passing the pacers and they were all so friendly and awesome.

Finally, I reached my friend Josh who was pacing the 1:35 group, it meant that I was that much closer to Sam but my ankle just didn't have it in me for the 6:30 pace I needed to catch him. The entire race really went super fast, I was very surprised when I saw the 10 mile marker. I even doubled checked my Garmin to make sure it was correct. It really felt like time had flown by. But when I saw the 10 mile marker, I knew it was crunch time and time to drop the hammer and leave it all that I had in the tank.

The last three miles were AWESOME. Usually, I am dead tired but not this time, I felt strong and knew I could continue at a good pace. I looked down at my watch and it said 1:29, I knew hubby had already crossed the finish line so I dug deep and ran my heart out to the finish line. I saw my sweet hubby there, waiting for me :). He made my day!

What I found hard about the race: not knowing my place in the field. I started at the end so I didn't know how far back I was from the other women. If I had seen them in front of me or known how far back I was, it could have helped me push a little harder.

I finished the race in 1:30:34. I placed 1st in my age group and 5th overall. Overall, it was a great race. I still love the course as much as I did last September. 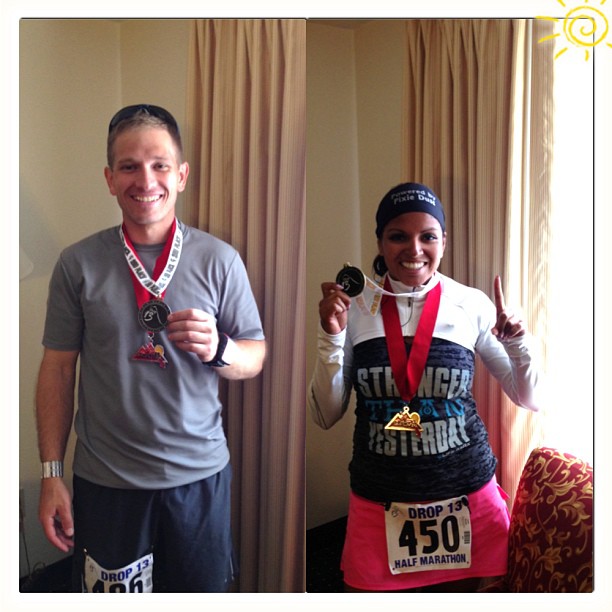 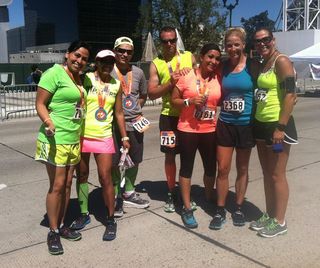 Second marathon of the year! We were so stoked. A group of friends were joining us and hubby and I were pacing the 4:10 group (so we thought!). We were ready and excited. We heard the course was mainly downhill so we were prepared for that downhill.

Morning of the race came and we went to bus load up no problem. We were given our shirts and our pacing sign. We were ready and happy. Took a wee nap on the bus and just chilled on the way up.

Up at the start line, our pacing captain said there was a problem and that the 3:30 pacer (the fastest pacer for the group) had not been able to make it. They wanted Sam (hubby) to pace it, which meant I would have been alone at 4:10. I hate pacing by myself-it gets quite boring as no one talks to you and if you need to use the bathroom, you are on your own, eek. But, I also knew I couldn't do the 3:30 with my bad ankle. It was a tough choice so we figured if I could help hubby with the first half, he could just take off for the last half and get the group in. So we went with it.

The race started and we were on track and had a few friends with us. We were enjoying the warm temperature and the nice terrain. We chatted and cheered people on. We were doing just peachy! But then, we started noticing that people were asking for bathrooms, we couldn't spot one at all. People kept dropping off from our group but we continued on. The rolling hils came and my ankle struggled up them but hubby was on pace. He was just a few paces ahead of me. I would catch him on the downhill and just drop off a bit on the uphill. We were doing great!

The half way mark was approaching we were jumping for joy at how well we were doing. But it was short lived. My hubby needed a bathroom badly, his guts were hurting from holding it, but not one bathroom came.  Finally, we saw a row of potties at the 13 mile marker. He went ahead and used the potty. I kept going with the group and with the help of our friend Josh, we continued on for the next 2 miles. Sam caught up to us and I gave him the sign and I dropped back to let my ankle rest up.

However, around mile 18, I saw hubby up ahead and realized that something was wrong. He was cramping. The heat of the day was catching up to him and no bathrooms around and he needed to use one (again). My ankle tendon wasn't doing too well either. I kept going with the pace sign but I knew that there was no way my ankle could handle the pace necessary to reach the time needed. I was bummed but still kept going.

Even with the pain of my tendon, I kept going and cheering those around. I had to walk a bit every now and then to allow my tendon to rest a bit.

I hobbled to the end :(. I seriously couldn't run by the end, I was more dragging my foot as I couldn't lift it. As I crossed the finish line, my good friends were there, Coach Don, Kev, and Josh and all three of them took me to the medical tent. They pampered me as they brought me drinks and food while the medics wrapped my ankle up. Bah humbug! Another marathon where my tendonitis got the best of me. But I still had a great time despite this.

I was able to see my friends, Bianca and Gloria, finish their marathon and by then the ice was doing its job on my tendon and I was feeling a bit better.

Finished in about 3:47...perhaps, I am just getting old and long are the days where I can finish in 3:30ish. Oh well, I still had a great time. It was a hot race, no porta-potties, and my tendonitis but still a great day for a race.  But the best race of all...the race I had to do to the hotel to use the bathroom...hahaha, I bet I was first place in that category! 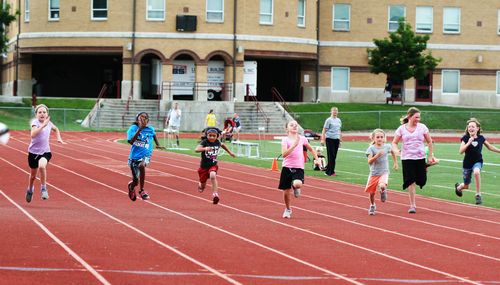 My sweet NyNy stepping out of her comfort zone. She loves track and field, she enjoys everything from it, except the pressure that comes with competing. She doesn't like to lose so she prefers not to compete. I completely understand the feeling. She feels that with losing it means she is not good enough, she feels less than everyone else. We are doing our best to teach her that not winning doesn't mean that she didn't do her best.  She is so little compared to everyone else in her age group that she has to work twice as hard as everyone else--that in my eyes shows me a true winner :).

The above photo is one I took of her 50 meter dash. She was so excited! Look at her beautiful long stride. She gave her very best. She came in 5th with a time of about 9 seconds :). She is a great runner and I am looking forward to seeing her run more and when she sees her potential I see, it is going to be marvellous :). 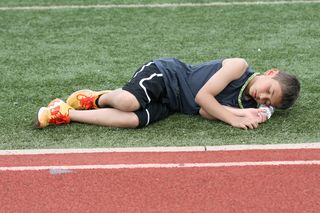