St. George Marathon--you get what you put in! 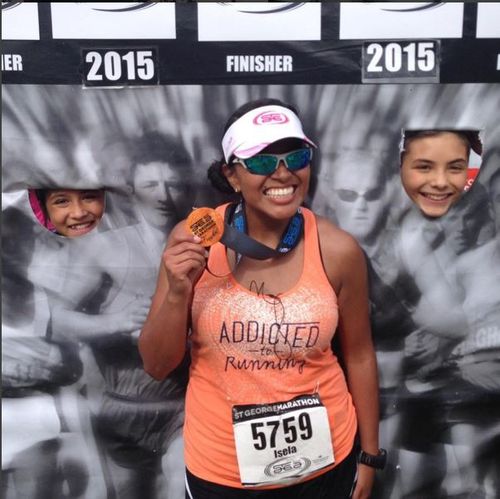 You most likely have heard the saying "you cannot expect to get results when you don't put in the work" well, that is exactly what this racing season has been. Working full-time, mom,  and part-time knitter have its tolls. One is unable to train 60 hour weeks. My training was lacking this season, the fact that I finished in under 4 hours with training weeks of 15 miles is nothing but a miracle. It is also no surprise that I ended up with an injury due to a)lack of training b)old shoes. Despite my lack of training, I was ready to give it my all-like always! I have been told by my ortho that I make the PERFECT runner from my neck up! I have the mental stamina of a Kenyan, but the body of a walrus sliding along the wet sand (if you look at the pictures and then compare it to the picture on the right (my top running shape), I have definitely gained a good 20lbs, sigh).

Our friend, Christopher, from California, traveled here to run the most popular Utah marathon, St. George! I started the day off quite well until I realized while I was inside the bus that I had forgotten my Garmin! Gah! I wanted to die! I jumped out of the bus and Sam came to my rescue and brought me my Garmin--I am quite attached to it when I run, but, at least, it wasn't my music. Anyways, I had to leave poor Christopher in the bus all by himself while I went to get my Garmin. But thankfully, we found each other at the top by the porta-potties. 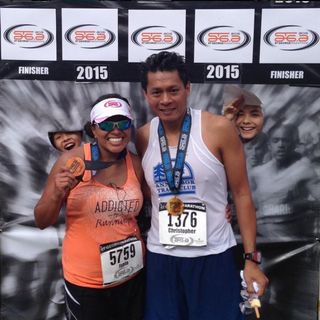 Although everything started okay, around mile 2 my left foot, around the arch started aching. I thought it was just a minor ache, so I ignored it. By mile 4, it was hurting something fierce so I popped 400 mg of ibuprofen and continued on. I knew the hills were coming and I knew full well that I would be walking up them so I prepared myself mentally for the massacre. The hills went as I had imagined, slow and painful. My foot kept on aching and it wasn't stopping or lessening. The day was warming up, but at least, it was cooler than Huntsville was a week ago. 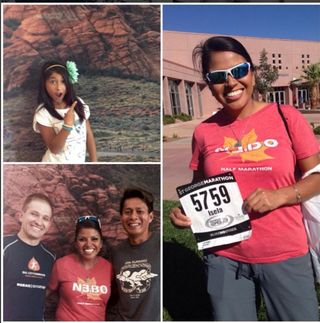 Around mile 18, I could barely put any weight on my left foot without it sending shooting pains up my calf and leg. I don't know what was wrong. I knew it wasn't fractured (ha, I am no doctor! For all I knew, it could have been!). I decided to pop the other 400 mg of ibuprofen and continue on. I wasn't going to stop now, I was only 8 miles away from finishing. So, being the very smart runner that I am, I continued on. The dose of ibuprofen helped lessen the pain enough for me to put some weight on my foot, I was happily limping along. I knew that once I got past mile 22 that it would be downhill from there and then I could let gravity carry me down.

The crowds from mile 23 to the end carried me forward. I truly would not have been able to do it without them. Could I have finished without them-yes! Would I have run without them there-no! They don't come to cheer me walk, so I "ran", I ran with all my heart and smiled as much as I could to them and thanked them for coming out. Near the end, I found one of my close running friends, Adrian. He was struggling with some cramps. I stopped and gave him a quick massage on his calves to see if that would help relieve the cramps. We stayed together for a little bit, holding on to each other and running along, picking up ice and popsicles. We couldn't stick together as he was getting more cramps, so I continued on while he handled the cramps. 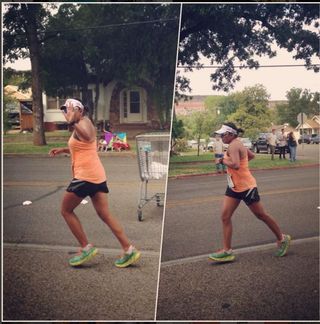 Finishing a marathon is never easy. Well, perhaps if you are super fast and speedy, but I think by that point, no matter your speed/pace, you are tired and want to finish. I was definitely ready to finish. I kept looking for the telltale sign that the end was near--my family. I finally spotted, over by the sidewalk jumping and screaming "mom". I saw my daughter starting to run to keep up with me, which was fairly easy at this point, then my son and my husband. How dear they are to me! I so very much love their support in my craziness. I gave it all I had left, every single ounce of strength and every step brought pain on my left foot. Triumphantly, I finished! I crossed before the 4-hour mark. How did that happen? Miracle! I don't know how I managed to make it to the finish with  6 seconds to spare, but I did it. 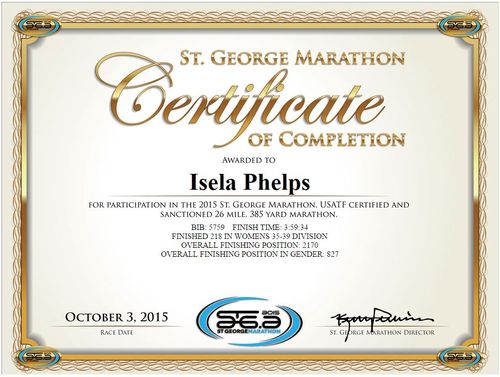 My foot: well, it turns out that I had almost a tear in one of my foot tendons. After the race, when I took my shoe off, the entire area on the instep of my foot was completely purple and blue. By next day, the bruise had spread to the entire arch and instep.  Yeah. It didn't tear completely but it was bad enough that I was not allowed to run for 8 weeks on it. I was even threatened by the doctor to put a cast on if I was not careful. I met with him/reported to him every 2 weeks for the 8 weeks.