Totally unexpected. I got super sick on Thursday March 3rd, so sick that I wanted to crawl under a rock and die! That evening my son had a hockey tournament and I dragged myself to the game, all the way down in Provo, a good 2-hr drive from home. I lasted about 30 minutes in the front seat and then I had to switch my son as I couldn't take the nausea. Truly, I felt like I was dying. The game was a whirlwind and I felt nauseated the entire time. At the end of the game, I climbed back in the car and curled into a ball and slept the entire 2-hour ride back home. I was miserable. The next morning, the same plus some flu side effects. Truly--why does the body react so violently to a virus inside the body, why can't it just peacefully let one simply die! The hockey tournament weekend was a no-go for me. I stayed home with Nyah--who took charge of me and became my little nurse. Friends came to my aid bringing me meds and soda. I drank my first coke in 16 years! Oh, it was like mana from heaven. My guts felt better the instant I started sipping on it. It may not be good for the body, but it is good for killing viruses.

Monday came and I felt almost human enough to go back to work. I was still feeling the flu in my body but was at least running at 70%. Then, that evening came and with it cooking or being around food (hubby cooks a lot of the meals as he gets home earlier than I do from work). The moment he started cooking, I felt again completely nauseated and sick. Something was not right. I was supposed to be getting better not worse. Then my kids came and gave me hugs and their stench about killed me. They were so smelly! A pre-teen girl and a teenage boy do not smell their best at the end of the day. Gosh! They were stinky!

Then it dawned on me....it couldn't be...it just couldn't happen. I counted and recounted and knew that it wasn't possible. But, I picked up a cheap test at the supermarket and I took it, waiting the required time to see the results. In my head, I knew it had to say "-". Well, I was wrong, the second the fluid hit the lines, it turned into a "+". No freaking way! It had to be wrong. I had to send hubby back to the store to get a "good and reliable" test. Maybe the $4.99 was wrong. Took the second test, waited the 2-minutes for it to say  "yes" or "no". Unbelievably, it was a "yes"!!! What in the world!?! Both hubby and I were confused and really have no clue how it happened, according to dates other than my body did something weird in between months, so we are calling it our miracle. 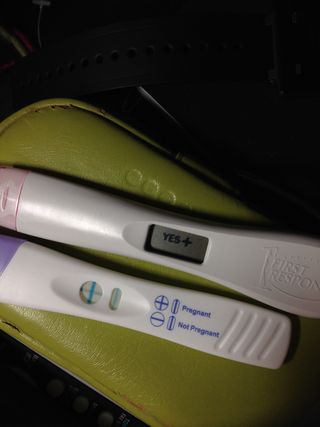 To tell you an approximate date is a little complicated so I will wait until the doctor gives us a more accurate date, but it should be beginning of November.

Am I apprehensive? Yes. After my miscarriage in November and the emotions that I went through (and still going through) this is difficult to accept, not because I do not want to be pregnant, but because I am afraid of losing my little one, again. I don't want to go through the loss one more time--I try to be strong in my everyday life and not be that little broken-winged bird, but that experience truly broke me.

I have been very sick this time around and I have an aversion to everything I smell. The hardest part has been my water intake. I used to drink 80-100 oz a day but I can't stomach the taste of water, so I have felt dehydrated all the time. I am queasy and feel nauseous all day long. Where before I didn't cook due to lack of time, now I can't cook for fear of barfing every minute. I want to think of these side effects as good omens....I want my body to be able to keep my little one.