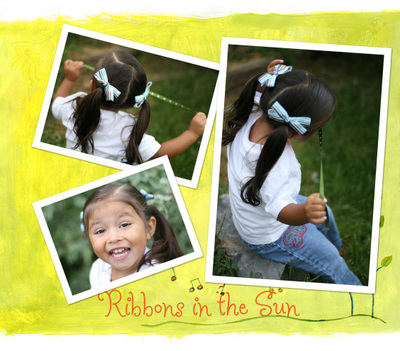 Yarn, needles, and looms were put aside for a few days due to a nasty cold and a little rest was ahead of me to get me back to health. But, I am restless and I can't sit still for too long, so I asked my neighbor next door to show me how to create some little hairbows for my munchkin. The result: fabulous!

I took a trip to the local craft store and got a basketfull of shiny, colourful ribbons. I have made about 8 sets so far and I have enjoyed the new creative outlet. And they look great on my little munchkin--she tends to make anything look good ;). 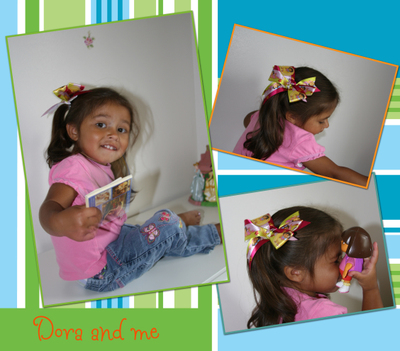 ps: I am planning on making a mini-video on how I made these ribbons for any other interested parties out there ;).

The time has flown. I didn't even noticed that the end of the month is approaching, yeah, I am aware that my knitting time is almost over for my Olympic challenge, but it didn't occur to me that my time was running out for my two monthly entries for the ABC along. Well, I guess I will be doing a Double Dose of it today  to catch up.

I will confess that I started my blog to talk about my Knitting Without Needles hobby--commonly known as loom knitting. I will confess that as I have learned how to knit with needles, I have fallen head over heels for the needles. I confess that I love needle knitting. There, I came out of the closet to tell you all that I *love* knitting with needles. I feel awful though to admit it in public--why, well, as most of you  may already know, I have a hubby whom makes knitting looms for a living. Yeah, knitting looms feed me and give me shelter, clothes, and money for my needles. Yet, I have abandoned them and I have taken up needle knitting. However, in my new journey with the sticks, I have not completely abandoned my knitting looms. Each time I try a new pattern, a new stitch, the wheels in my head turn trying to figure out a way on how to transfer the pattern over to loom knitting.

D stands for Diapers. My little boy, he has graduated to the fun underwear, the one with Batman, Spiderman, Nemo. He is a big boy now! He is completely, and absolutely potty trained!

No more diapers/pull ups for him. It has been an entire week that he no longer wears pull ups. Even at nights, he stays dry! I thought I would never see the day. Hubby and I always joked that as long as he was potty trained before he went into college that he was ok, inside our hearts, we hoped that he would pick it up soon. He finally did! He did it all on his own too. The trick that did it--we told him he couldn't go to school if he didn't go potty on his own. Then, we took him to his doctor's appointment and the doctor told him that he was a big boy now. Big boys go potty. Big boys go to school too. Well, the doctor's words made it sink in (forget the fact that Hubby and I have been telling him those same exact words for the past 2 years!) Beware the power of strangers!!  I am very proud of my little boy, whom just yesterday, I called a toddler on my post, but he is a toddler no longer, what is he now, a young little man? You go little man with the Batman underwear! Now, if I could find some with the Incredibles, I would be the Super Coolest Mom in the world.