Last Minute Slouchy Hat Loom-Along. In part 1, we covered the first 8 rounds of the pattern. In 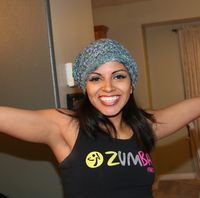 Round 10: Knit with the e-wrap method.

Round 12: Knit with the e-wrap method.

Part 3 will be posted next week--it will cover the Gather Bind off. 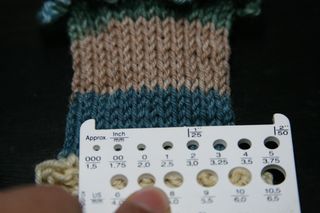 I was curious to see if the new All-n-One knitting loom could handle sock weight yarn, so I took out a skein that I had around. It was is Knit Picks Felici. To my surprise, the knitting loom did fairly well with this thickness of yarn.

I got a total of 7 stitches and 8 rows= 1 inch Woot! Woot!!! The sample was done in stockinette stitch (using the Flat Stitch).

Nice! The fabric is not super stiff or tight but it would still make a very comfortable sock or a springtime hat.  Now that I have tried it, I have taken the fear out of the equation so get out some sock yarn and attempt some socks or a hat with sock weight yarn.

Happy Birthday to the All-n-One Knitting Loom. Here is a short video showing you this new knitting loom. Enjoy!

Video Loom-a-long for the Last Minute Slouchy Hat is up!

In part one, we cover set up of the loom and we work through the first 8 rounds of the hat. At the end of Part I, you will have the brim done--the part with the ribbing of the hat.

Gather your materials and let's get started!

Part II will be up by Friday, March 16th. Come back and see how to finish your very own slouchy hat. 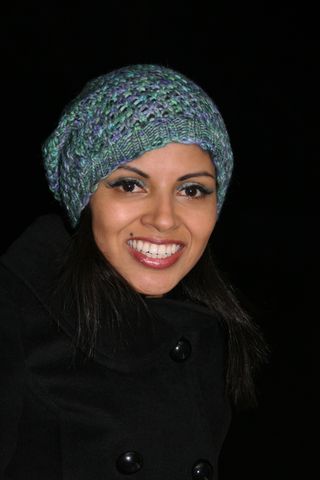 It was Tuesday morning and it was my turn to carpool the kids to school. I was running around like crazy that morning and I hadn't even had a chance to change out of my pajamas. 6 kids were in the car waiting for me and the clock was ticking. I didn't had a chance to go upstairs and brush my hair and make myself look half-decent, but as I was going out the door, I saw my slouchy hat and put it on. In a second, I went from looking disheveled to presentable and that my friend's is how the name of the slouchy hat came to be. It is my last minute emergency tool! I love it! I hope you enjoy it as much as I do.

Size: Fits up to a head circumference of about 21 inches.

Notes: Working clockwise around the knititng loom. The ribbing section is done with the knit

stitch, may substitute with the flat stitch or the u-stitch. The rest of the hat is done with the e-wrap stitch. Important: Note that on Round 11, we move the first stitch one place to the left (clockwise) to keep the pattern slanted. We will use the stitch marker to keep track of our new Peg 1 position. We keep moving it after each pattern repeat so each time you do a row 11, you move the stitch marker over to mark the new Peg 1 position.

Knitting Loom Settings: set the knitting loom to 80 pegs (35 on each of the long rails and the two sliders).

Abbreviations:
k=knit stitch
p=purl stitch
k2tog=knit two stitches together
yo= yarn over (simply e-wrap the peg that needs the yarn over)

Cast on 80 stitches, join to work in the round. Place stitch marker on 1st peg.

Round 12: Knit with the e-wrap method.

Repeat Rounds 9-12: until item measures 9 inches from cast on edge.

Bind off with gather removal method.

Steam block to open the lace, be careful not to steam the ribbing portion as this will loosen the stitches. 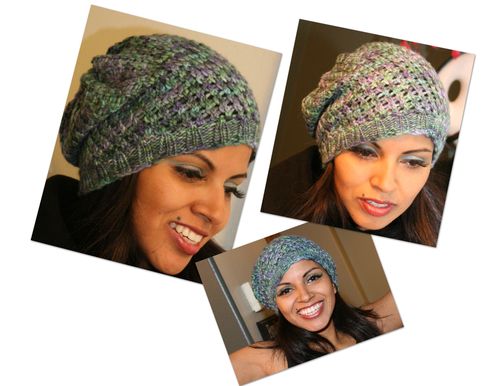 Wanna do it but are worried about not being able to crank it out, no worries! Check back next week for a how to video :)! I got ya covered! In the meantime, go order your loom and your yarn and we'll see ya next week. 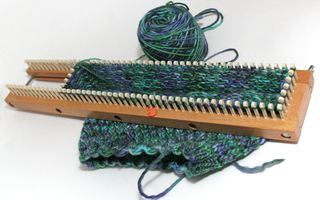 The All-n-One knitting loom by the Authentic Knitting Board company.

We have all been waiting for the much anticipated release of this new knitting loom by the KnittingBoard.com company. I have had the pleasure to work and create with this knitting loom for the past two months.

The moment it arrived, I rushed to open the box and was immediately in love with the knitting loom. Hundreds of design possibilies came to mind. It is a knitting loom that can go from making a little itty bitty baby bootie to a shawl, even a blanket!

Down to the knitty gritty of the loom. Gauge: it is small gauge, pegs are at 3/8" apart. The knitting loom consists of 2 long rails (48 pegs on 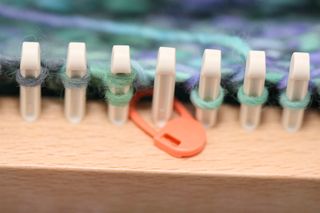 each rail), 2 sliders--with 5 pegs each slider, for a total peg configuration of 106 pegs. It also comes with two spacers to use the knitting loom as a knitting board. The pegs are made out of nylon, giving the user a very smooth peg to slide your knitting tool on. Speaking of the peg--it is grooved to facilitate knitting and the pegs also have a small cap at the top to prevent the yarn from accidentaly sliding off the peg. The knitting loom itself is made of hardwood giving you a solid, strong loom. The wood has been varnished to provide you with a smooth, glide-your-hands-on-me knitting loom.

All-n-One loom will include the following:

The knitting loom is a delight to work on. It is so smooth to the touch and since it is made out of 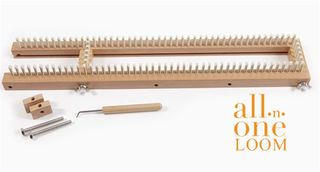 wood, it feels warm the more you use it. The pegs are smooth but not so smooth as to make the yarn pop off the top. They have enough grab for the yarn to stay on but yet smooth enough so the knitting tool slides easily on it. Adjusting it was a breeze too. All you have to do is loosen the wing nuts at the ends and slide the slider up/down, tighten the wing nut and you are good to go.

And now that I told you all about the knitting loom, let me show you what I have created on it so far. 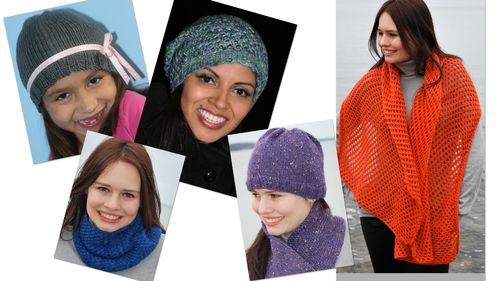 Three of the patterns are available through the KnittingBoard.com website, in the free pattern section, the Lacy Shawl and the Cowl. The purple hat instructions come with the knitting loom.  Look for another pattern (the slouchy hat in the center) coming shortly.

I have used DK weight yarn (the gray hat that my daughter NyNy is modeling and it gives me an impressive 11 sts per in. Worsted weight, I had 9.5 sts per inch.

Here are some quick numbers for your use:

As I play more with the knitting loom, I will be posting peg numbers for socks and other basic items.  Coming next...the Last Minute Slouchy Hat!