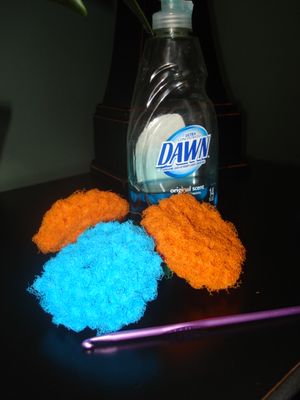 Awhile ago, a neighbor gifted me with some of the best scrubbies ever. Soon after she gifted them to me, I asked her to share the instructions. She wasn't unable to teach me as she had barely learned from her Mom, so her Mom came over to my house one day for about fifteen minutes and she showed me how to crochet one. I love it when others take the time to sit down to share their craft with me. I know the basics of crochet but for the life of me, I cannot read the instructions (I guess, I haven't dedicated a chunk of my life to learning that aspect yet), but I am very good at duplicating an item, as long as I have a model to follow (yeah, my brain works in weird ways). The teaching went swift, about 10 minutes and we had one scrubbie done. She called me a model student and went home (I felt like a good dog and if I had a tail it would have been wagging).

I love my scrubbies! I can make 3 of them out of 1 yard of netting, the cost, about .99 cents! They last a very long time too and just like the other commercial scrubbies, this one can be thrown in the dishwasher for a quick sterilizing too. However, unlike commercial scrubbies, you can customize the color of your scrubbie to match your kitchen decor or the upcoming holiday.

They are really wonderful scrubbies and I hope that you have a chance to try them out. With permission from my teacher, I wrote the basic instructions for them. I would like to thank my teacher for taking the time to show me how to create such a useful item, it will save me loads of cash in the future. Also, I would like to thank my friend Jenny Stark for helping me clean up and organize the pattern. She is a crochet expert and I could not have put this one together without her help.

BTW: I crochet slow and I can crochet 3 of these little scrubbies in about 20 minutes.

Get your Scrubbies Pattern...if you get a chance to try it out, let me know your thoughts on it.

PS: This is my very first crochet pattern...I am eager to know your thoughts.

Edit: I have found netting at Joanns. It is similar to Tulle, except a little rougher and cheaper.

In one of the corners of our back yard, we have a small dog pen. My kids every day, religiously, go to that corner and scream "puppy, puppy", then the dog next to us hears them and he starts barking. Everyday, they are tricked by that little dog next door. They believe he is in our dog pen but he is hiding. Every now and then, they get a glimpse of him through the fence, it is a little black Salchichita dog (a small hot dog style doggy...don't ask me the breed because I know more about cooking than I do about dogs...and that is saying a lot about my cooking!).

Yesterday, in my blog reading, I came upon this cute little Grommit that my little one would just be so thrilled to have, unfortunately, it was a crochet pattern, and well, although I know how to crochet, my crochet-reading-patterns is worse than my knowledge of dog breeds!! I  quickly turned to Dlandra trying to get her to make one for little N....she read the pattern and said that I could do it! So of course, I trusted her...she knows me...and she knows that if I want something I would get it done. Soon enough, after finding out what "sc into the first two stitches" meant, I was ready to go. D empowered me by telling me that I could do it!

I didn't have suitable yarn and the worst part...no crochet hooks to match the yarn! Oy! So I made it with the wrong yarn and wrong crochet hook. I felt confident...heck I finished the head and the little ears, then come to find out upon closer inspection by D at Nite in Knots that I had skipped 5 rows in the head section, hehehehe.

Needless to say, little Grommit was looking screwy, but when I got home and I sat down to finish it, little N recognized it right away and she stayed by my side throughout screaming "Grommit, my Grommit" The Grommit didn't even get a chance to receive legs, he was snatched away as soon as I embroidered some little eyes and nose on him!

Soon after, B started crying..."I want a Grommit too, Mom, Knit me one....pleeeease" now, what mother would not get their butt in gear right away and start on the next Grommit? I couldn't resist, it is not every day that my kids want me to knit them something.

And today, my house is invaded by little Grommits and "woofs, woofs, woofs" from my kids. Now, they are asking for a Wallace to go with it...and the crazy big Rabbit too. Tell you what...give your kids an inch they take a mile! Hehehe, and crazy Mom will probably attempt making the Wallace to make them smile :).

I learned a few things from the first Grommit and the changes that I made are as follows:

Although the pattern has you crochet the head first then the body separately, I crochet them both together so there would be one less seam to sew--so, I crochet the head, then the little body.  I also put a marker on the double increases on the face to mark the front of the face. On the body, I also gave him a little gut by making some double increases in the middle front section. I made the little arms and legs longer. The ears are like 3 times longer too than the pattern calls for, I figured I needed longer ears to make them flip a little bit.

And that's the Cheeseeee for today!!