I know it is probably only my Mom who is eager to find out the rest of the story about our trip, so without further interruption, the last installment. The last adventure happened at Seaworld, San Diego. We loved it! Everything about it was just sensational. Bryant's favorite section was the Shark Encounter. It was amazing walking through the entire exhibit, especially going through the glass tunnel and you can see all the sharks surrounding you. Kind of scary! 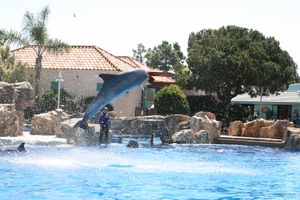 Nyah's favorite part was seeing the dolphin show. It was quite remarkable to see those wonderful creatures so close. They are so friendly and lovely. 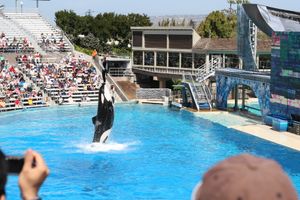 We all enjoyed going to the Shamu Believe show. It was in one word: Inspiring. I came out of that show believing that I could really do anything. It made me think that maybe if I learnt to swim better that I too could become a Shamu trainer. I loved it! We all liked it so much that we came back to the night show to watch the Shamu Rocks on Around the World. It is amazing that they can teach these wonderful creatures so many things and that we can learn from them too. 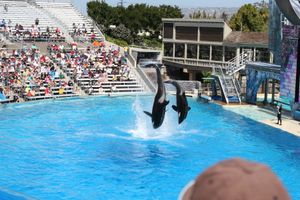 On the very last day, we were all tired and ready to come home, however, we still had tickets to go to the San Diego Zoo and the Wild San Diego Zoo. We dragged our tired feet to the San Diego zoo and while the kids started off quite happy within an hour or so of being at the zoo, they grew tired and started whining and fighting. We saw only a few exhibits and we decided that to keep the harmony it was best to pack up and go. Unfortunately, we didn't make it to the Wild San Diego zoo, maybe next time. 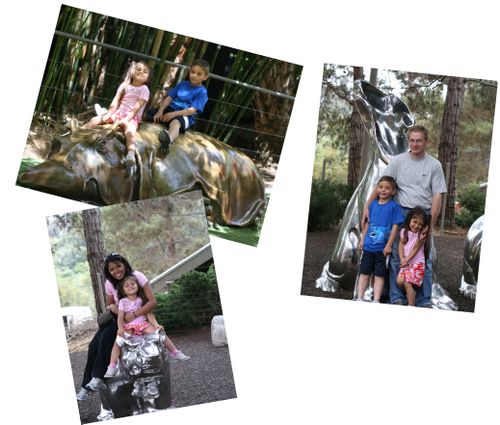 Our entire vacation was full of fun and busy all the time (as captured by those last two pictures of the kiddos asleep in the car). It gave us the chance to dedicate our entire time to our children. They were happy that for once our attention was focused 100% on them and not on work or something or other around the house. Personally, I enjoyed having my little family all to myself :). 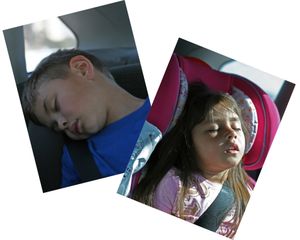 The second day we spent at a fun place for the kiddos. Legoland. It may sound a bit weird but it is actually a fun place to visit. There are places where the kids can build stuff out of legos but it is not all about that. There are rides that even my shorty little 37 inch Nyah can go on. She was thrilled to go on rides, especially the fast ones. There were so many rides that they really enjoyed, I am just going to highlight the ones that they enjoyed the very most. Of course, if you asked them they'll just tell you "Legoland"...so the entire thing was the most fun for them. Both, her and Bryant absolutely loved the Coastersauros roller coaster ride that we took. It wasn't anything fancy but it was fast enough for them and for us (we are not avid roller coaster fans). Another place where they just had a blast and we got to sit down and get a breather while they enjoyed themselves was the Hideaways in Castle Hill. If you are planning a visit to Legoland, be sure to put this on your list, probably mid way down the list so that you can take a little break while the Wild Things still play. The last favorite for my kiddos: Volvo Driving school--talk about being excited to get a piece of paper. At the end of the driving, they get their own Driver's License! Yeah, they both wanted drive the car after wards. They have one for little ones (3-5yrs) and one for the older kiddos. A huge highlight for us, the adults, was viewing all the minilands. Looking at all the different places of the world was fantastic! Both, Sam and I, were in awe of all the time and effort that the builders put into making all the little cities/landmarks. The children thought they were neat too, but not as neat as the rides. I can say that I have seen the Taj Mahal and the Eiffel tower, even if they were made out Legos. Definitely a fun attraction to spend an hour or two observing. We didn't get to do half the things in the park but we felt that the kids had had plenty of fun. Maybe on a next trip will catch all the other fun things we didn't get to do this time around, such as the Lost Kingdom Land of Adventure (the line for this was super long and I didn't want to waste time waiting on the lines so we just did other stuff). We got there at opening (10am) and we left the place at 6pm...dragging our feet and completely and absolutely exhausted!

Making memories with the kiddos and hubby is sure one of my life's highlights! 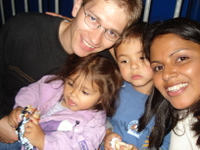 Our trip was fabulous! Wonderboy *loved* everything about New York, the buildings, the food, the hotels, the Statue of Liberty and of course Grandma and uncle Edy. Benny was a bit homesick and every night she asked for her couch, blanket and of course her Dora show, despite her homesickness, she enjoyed being around Grandma and her uncle. 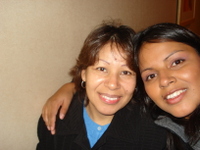 Our night out to see Les Miserables: kids stayed at the hotel with Grandma and uncle while hubby and I ran out to see the play on Saturday evening. I had seen it back when I lived in NY and the second time around was as good as the first one. Hubby enjoyed it too. It was a great date: one of our best ones ever! Malhakita Sammer. 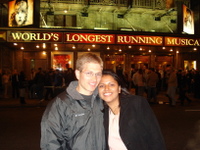 Coming back from the play: it was great seeing the following: 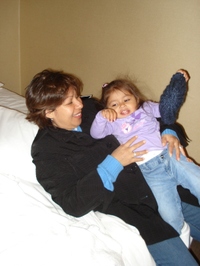 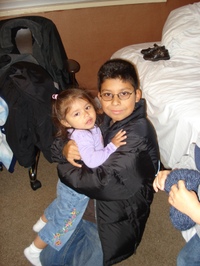 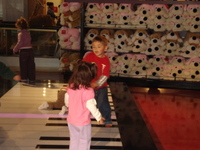 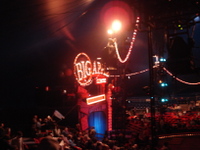 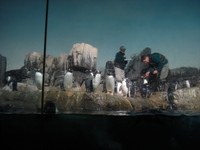 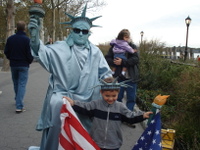 And lots of other pictures of our travels in the next slideshow: we visited the American Museum of Natural History, where Wonderboy chose to have a family date in the Reptile exhibition, lots of Central Park playgrounds, and the Toys 'R Us Ferris Wheel in Times Square. We went to the MET museum on Monday but it was closed (could have prevented this if I had visited their website, duh), after finding out that it was closed we headed to the U.S.S. Intrepid only to find out that it was closed too--again, could have find out if I had visited their website. It is okay though, it gives us something to look forward in our next trip to NYC--that along with seeing the Phantom of the Opera.

Get Your Own! | View Slideshow

I reckon I am a BINGO SQUARE....if you have me on your card and need to locate me. I'll be:

The hottie with the Black t-shirt with the Skully and Needles in the frontage area.

If it is really cold, I will be sporting the "Player Bingo" hoodie (with the black shirt underneath...and a bra, lol, and...well, you get the idea).

And I will be the one dragging these two cuties.

For sure, I will be hanging out at the Golding booth for a wee bit of my stay on Saturday.

So Laticia sent me the link to the Rhinebeck Fiber Festival. Of course, I had to check out the event's location and guess what!  It is only 45 minutes away from my Mum's. My Mum lives in Dover Plains, NY. Oh, this event is so tempting for various reasons

Only 3 things holding me back from it:

It would definitely be super nice to go and see my Mum and for her to see the children.

The last mini-vacation of the summer took us down to Park City, UT to the Sheepdog Championship & Fiber Festival. Our hopes were very high, both hubby and I had never been to a fiber festival before so we were hoping to see lots of different things--spinning wheels, triangle weaving looms, floor looms, and of course, fiber. I, of course, was looking forward to splurging a bit of mula on some yarn. We saw a couple of spinning wheels, two Ashfords to be exact, one a single and the other a double. I don't spin (yet), but I did like the looks of the double. We found 1 triangle weaving loom located in a nice booth full of roving and drop spindles. I am guilty of fondling lots of the roving, so if any of you stopped by the booth and it had some drool on it, it was mine...hehehe.  We were expecting to see more spinning wheels and me, I wanted to pet lots and lots and lots of fiber. Oh, well, next year we may go to a fiber show in Colorado ;).

The day turn out really well, we found our friend Rita from Yarn Today, she had a booth there and we stopped and chatted. Bryant was very happy to see her and Andy. Bryant took off with Andy for a bit of llama petting. Talking about Bryant, he really had a blast. 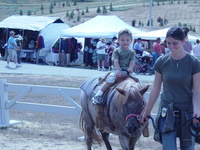 This was his very first Pony Ride and he loved it. I thought he would be scared, but he was very happy to go on it. His only complaint-"Mum, I don't have a hat" LOL. Yep, those were his exact words.

Then, the Bouncy House-if there is ever a bouncy house, he has to take a go on it. 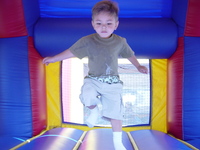 And if you ever wondered what the men wear under their kilts--take a peek :). 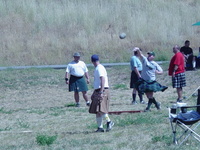 Yep, apparently, nowadays, they wear something like spandex shorts. These are the Scottish games. The guy is throwing/hurling a 16 pound rock, then they measure how far the rock landed. Apparently, this was used in the past to see arm strength. 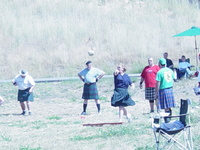 Park City overall--cool looking little town. We are definitely going back to visit all the shops I missed on Main Street. 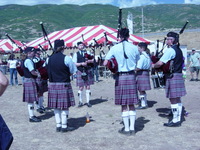